A wish is put into practice

In 1987 I fulfilled a long-awaited wish and bought a Bianca 320 sailing yacht. It was always unclear whether the number 320 referred to the width of the yacht of 3.2 metres or the length of 32 feet. She was stationed in Meilen on Lake Zurich. Meilen because it was close to home and there was a chance to enjoy the yacht in the evening after work. 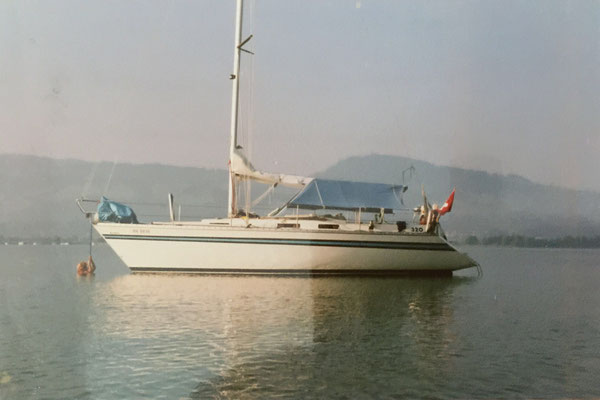 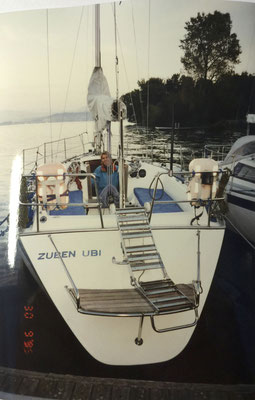 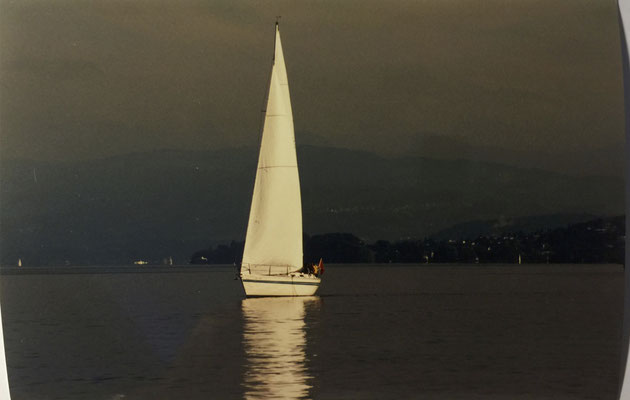 How it all began

Actually, the whole thing started a little earlier. Due to my many years of sailing experience, I finally wanted to get an official sailing license and in 1986 I enrolled for a B-Certificate course, the Swiss certificate of proficiency for leading sports and pleasure ships at sea. I learned that the normal sailing licence for sailing yachts on inland waterways was a prerequisite for this by studying the examination requirements for the B-licence. Although I had been sailing since 1970 and was active as a sailor in the Swiss national team from 1974-1982 and even won many regattas and championships, I was a real greenhorn when it came to official certificates. Well, even Formula 1 drivers don't need a valid driving license to drive races and at home and abroad, no one ever asked us before a regatta if we had a valid sailing license.

So we started with the so-called A-licence, the official document of identification in Switzerland for the guidance of sailing yachts on inland waters. Since Lake Constance places special environmental protection requirements on water sports enthusiasts and their mostly floating vehicles and borders on Germany, Austria and Switzerland (and thus actually represents an international body of water), the pure A-licence of Switzerland was not sufficient to obtain approval for Lake Constance. So the Swiss also needed the so-called "Bodenseeschifferpatent". This meant that there were a few more theoretical questions related to Lake Constance at the theoretical examination and that the practical examination had to be carried out at Lake Constance. Due to the training with the sea scouts, the military service as a Pontonier and the sailing experience of many years the theory examination was nevertheless rather easy for me, since I knew most regulations, nautical marks, right of way rules etc. anyway already. The practical exam was even more special as it became a sailing and trim lesson for me to the exam experts. He took the opportunity to let an enthusiastic regatta sailor show him a few sailing and trimming tricks during a whole afternoon!

Without having really informed myself in detail what the B-licence actually contains, I registered for a B-licence course at Lake Constance. Since I had neither desire nor mood to sacrifice x evenings to attend a for me normal "sailing course" over several months, I chose a 2-week intensive course with subsequent examination. So a group of like-minded people met at the fixed start date in Bad Horn on Lake Constance and moved into their rooms there. The aha-experience came for me already in the first lesson, when it was explained what belongs to the B-licence, that it was NOT about the actual sailing, that there was also a theory examination which had to be confirmed by two practical trips over a total of at least 1000 nautical miles and that one assumes that the participants had already familiarized themselves with the partly ordered course documents in the run-up to the course. Wow, that was just a bit much for me! I "as an experienced sailor, Pontonier and former sea scout" had thought to make me this B-licence with left and actually hoped to be able to spend two comfortable holidays weeks in Bad Horn. The awakening followed one after the other. First, I had not procured the teaching materials in advance of the course, nor did I have any idea what the exact content of the lessons was. I had read the course announcement with the details only superficially and thought, is not a thing for me. Sure, I knew seamanship. There wasn't much that was new anymore. But course calculations from the right to the wrong course or vice versa, handling of nautical charts, list of lights, maritime law, meteo, medicine on board, etc. Many things were quite new and I was glad that there were also other course participants who had some difficulties in one or the other subject. Already on the second day a sworn group formed, which learned together and supported each other. In the evening we often sat together over a beer, asked each other questions or tried to shed some light on the subject. It soon became clear that after successfully passing the theory exam, the conspiratorial group also wanted to complete the required miles together. Sepp, our primus of the group, knew a skipper with a 65 foot Taiwan ketch on which we would all sit together. After x-hours of study, learning by heart, checking each other out, course calculations and corresponding drawings in the lesson chart, the day of the exam came. We all passed the exam more or less well and in the required time. We were successful and happy (also about the longed-for cool beer after the exam) and decided that we wanted to start our first cruise together in spring 1987. We had exchanged the contact details (at that time not yet with smartphone and SMS) and said goodbye to each other. Sepp, our group leader would organize the trip and get in touch with us again in time.

At the helm of Nelea

I liked it much better than in the hot theory hall at Lake Constance. This is my element, and I also like to work in the galley, as described elsewhere.

Here I sit at the helm of the 18 m Taiwan Ketch Nelea on the Mediterranean Sea. Unfortunately I can't find more pictures from that time at the moment.

The journeys were all great and the team spirit was brilliant. The sworn group from the theory hall at Lake Constance turned into long lasting friendships.

Apart from the two pure milestone trips, which finally brought us the longed-for B-license, we also met privately and again for a holiday trip on the Nelea and enjoyed the islands of the Tyrrhenian Sea. "The Costa Concordia was not stranded before Giglio and distorted the view to the beautiful little island."

In 1987 it finally happened. I bought my own yacht. As I was very committed to my profession, I only considered a yacht that could be stationed on Lake Zurich, i.e. near my place of residence. Although the yacht was stationed on a rather small lake, it had to have the potential to be transported to sea and to have life on it. A Bianca 320 was selected, which offered enough space in the duty and was equipped with a bow and a stern cabin, which had enough place for 4 persons. The kitchen was passable and there was enough space in the saloon as well. Also the navigation corner was comfortably equipped, so that there could be handled sufficiently well with nautical charts. Actually a ship with which one could have sailed alone or in pairs around the world. Somehow I had this as an ulterior motive when buying the yacht. The only disadvantage was that even with my 187 cm I had no real headroom in the ship.

As you can see, the storage box was also big enough for me. The time had come to enjoy the warm summer evenings on Lake Zurich with friends, to eat well and to discuss over a beer or glass of wine about cruises and life on the ship and to make plans for the future. It was a wonderful time if it hadn't been for the daily routine at work. The yacht was christened "Zubenubi", which is the abbreviation of the name of the alpha star in the sign of the zodiac Libra and also suited me, because the Libra is my sign of the zodiac. The name of the yacht was by the way the suggestion of our group leader from the sworn group of the B-Schein course.

Almost simultaneously with the purchase of the yacht Alice entered my life. We originally met during a snowboard week with José Fernandes in Livigno. After that almost a year passed until we met again at a dinner with a mutual friend and how could it be otherwise, stayed together.

Sailing inspired Alice to such an extent that she decided to do all her training as well. Of course, this also included miles trips. I was welcome as a partner or companion, but the training should be done by other skippers (it's always like this, the prophet in his own country .....).

The pictures here are actually the only photos that were taken on the sea during this time. Here we were together on a overpass of a 55 feet yacht from Sicily via Sardinia, Menorca to Mallorca.

Since we enjoyed sailing, sailing and living on the sea, travelling, the different countries with their cultures, people and also culinary delicacies more and more, we decided to found a joint company in 1989. The purpose of the company was and is still today the execution of trips and events on the inland sea as well as on the high seas as well as the trade with any ship accessories. What could be more obvious than to use the name Zubenubi also for the company. 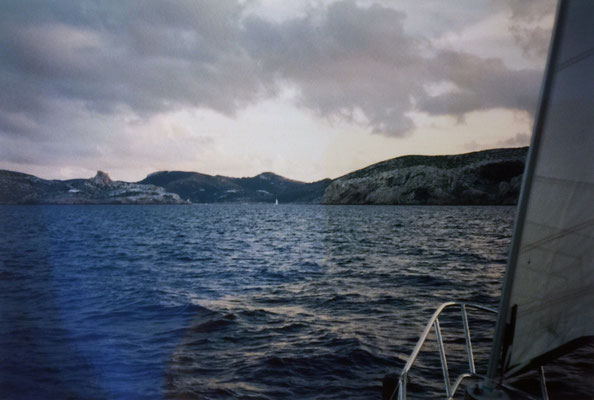 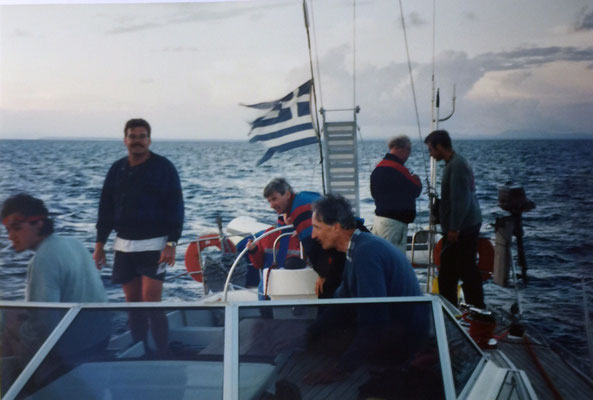 After a few wonderful years with our Zubenubi on Lake Zurich with some very funny summer holidays with our godchildren and other nieces and nephews, the commitment for the profession with Alice and me finally grew bigger and bigger. In the years 96 and 97 we only made it to our ship on 4 weekends. This moved us, since an unused ship really suffers the most, to put Zubenubi up for sale with a heavy heart. Zubenubi finally found a new owner couple and was transported to the Lago di Lugano. There the new owners wanted to spend the summers, which are a lot longer in Ticino than at Lake Zurich, on the ship, enjoying their pension and the Ticino.

The past 18 years after the sale of the yacht we have spent most of it with intensive work. We had a lot of interesting projects to manage in our profession and there were also several mergers on the employer side. Our daily work had us firmly under control. At the same time, with the strong help of my father and a brother of Alice, we were constantly rebuilding our house, which we bought in 1994, and increasing the usable space by almost 100%. Finally, with two indoor and one outdoor kitchen (currently with 5 grills!) I was able to enjoy my most important hobby to the full.  Of course, our relatives and friends also often had the pleasure to enjoy one or the other delicacy or to hold out as "guinea pigs".

We often wondered whether we should buy another yacht, but the professional commitment was simply too high. Time passed and we slowly but steadily approached the so-called 3rd stage of life. The death of my father a few years ago showed me clearly that life is finite and actually quite short. He had worked hard the whole life up to the retirement and wanted to travel then as a pensioner still something around and enjoy the life. Unfortunately, this wish was granted to him due to illness.

This experience and the conversations we had with my father during his illness were actually the triggering moment which led us to plan our 3rd phase of life a little earlier and to look for a yacht again. The time has come for us to move and start something new!

This is the end of the beginning. Now it really starts!